As 2018 draws to a close, Coinigy’s team members close the books and celebrate our fourth year in business. Through both multiple bear markets and multiple bull markets over the years, we have weathered all kinds of market conditions to continue building what we believe in. Below, we take a look at what happened this year for both Coinigy and the cryptoasset industry as a whole.

This year marks Coinigy’s most successful year yet. We have grown from a little-known platform in 2014 to handling hundreds of thousands of subscribers trying out the platform, even with the little-to-no marketing that we do.

2018 also marks another year that Coinigy continues its growth without having ever taken venture capital investment into the company. While we are not opposed to the idea, given the immense raises some fresh companies and projects have been doing, we are proud to have grown and thrived on our own. Needless to say, we also have never held an ICO nor do we intend to in the future.

Looking back over this year, the market saw the introduction of many new tools for traders. Coinigy introduced several huge features, updates, and tools for our users. While the platform is still evolving and improving all the time, we felt the end of the year was a good time to recap key milestones for the company. The timeline below provides a quick snapshot of our year: 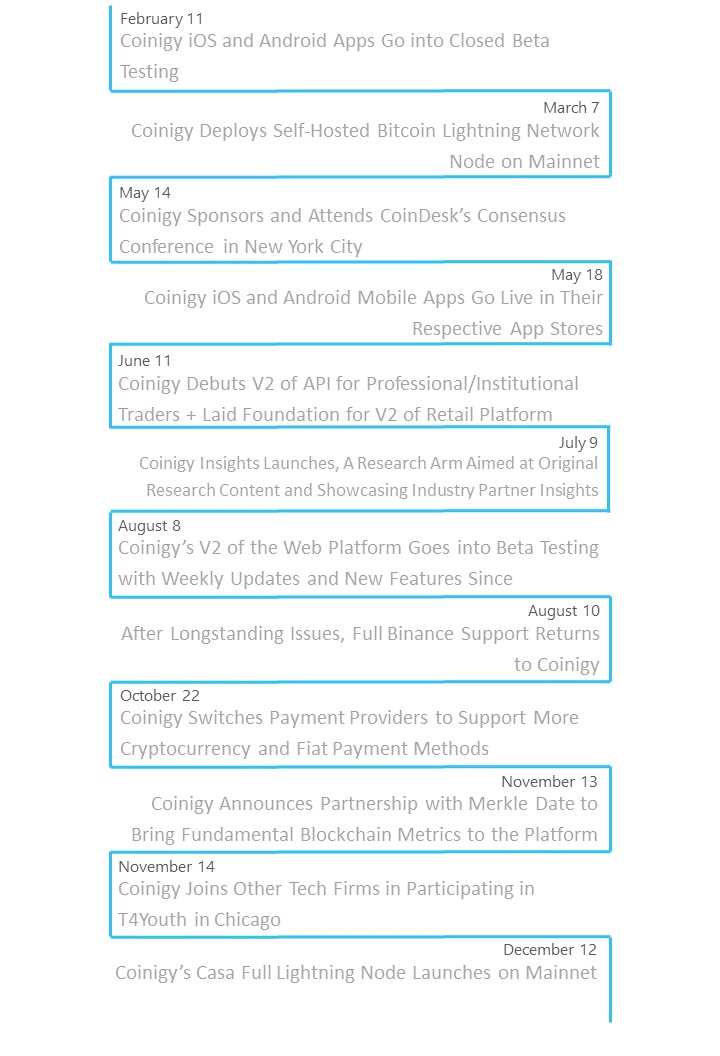 This is far from everything we did in 2018. Over the course of the year, we added support for several new exchanges, including Huobi, Kucoin, Binance, Deribit, and many other integrations. Through these trading integrations, Coinigy processed tens of billions in volume directly through the platform.

With V2 of the platform in beta, we are also opening up the site to a much broader range of users. As of writing, V2 already supports over 14 languages, including Spanish, Russian, Czech, Arabic, and more.

All of these updates and features were not without struggle. This year, both Citi and American Express began blocking payments for Coinigy subscriptions solely because of our association with cryptoassets. Our email provider MailChimp also terminated our service for similar reasons, which directly affected new users signing up, account login notifications, price alerts, and other functions.

Even with these issues, we are still going stronger than ever. We have overcome much worse over the years and continue to provide a service that has only become more necessary and desired as the cryptoasset space grows. We are not going anywhere.

Moving forward, we have huge plans for the future, for which our team has several priorities for in the short term. These include:

Of course, we have far more in development as well, and will continue to push out new content and updates on a weekly basis. To stay updated on everything Coinigy, be sure to subscribe to our Insights blog and follow our Twitter.

Capitulation. That was the word of 2018. Almost every cryptoasset saw its price sink over 80% from its high. Several high-status projects that held initial coin offerings either went bust, severely drew back in operations, and/or even completely changed project direction. With this, many lesser-known ICO tokens and other cryptocurrencies are close to worthless.

But as the saying goes, prices are the least interesting aspect of cryptoassets. Bear markets are when the real development, growth, and experience comes into play. Companies and projects that endure market conditions as bloody as 2018 are strengthened and in a great position to reap the fruits of the next bull market as adoption and usage grow.

When the market peaked in late 2017/early 2018, the talk of the space was Bitcoin and other cryptoassets failing to scale as intended or promised. Now that that chaos has died down, Bitcoin and the community around it is consistently moving closer toward its goal of being a scalable and censorship-resistant currency and store of value.

The Bitcoin network saw the percentage of payments utilizing Segregated Witness (SegWit) peak at over 45% since its launch in the second half of 2017. Further, the Lightning Network moved out of beta and now has around 2,000 nodes routing payments across well over 10,000 channels.

Beyond Bitcoin, 2018 is when cryptoassets gained increased exposure from more traditional firms and regulatory agencies. The big question on everyone’s mind? Whether the VanEck/SolidX Bitcoin ETF, which the SEC has postponed its decision on a handful of times already, will be approved come time. While community members continue to hype it up, officials note the lack of transparency and evidence of digital asset price manipulation may prevent approval of a crypto ETF anytime soon.

Further, corporations began to (and in many cases, continued to) really dip their feet into the space and put some skin in the game. IBM, Amazon, Shell, BBVA, and many other large companies invested in startups and/or launched their own blockchain-based solutions to various use cases. Just recently, Waves, a blockchain platform focused on asset issuance, raised $120 million -- proof that interest and money is very much alive and flowing into the system.

Of course, as mentioned, with all of the growth that occurred, the pains of the drawback were also felt. Several ICO projects found themselves under SEC investigation or their founders arrested. With so many average consumers being pulled into the crypto craze at its peak almost a year ago and subsequently losing a ton of money, the pressure for a regulatory clampdown was well-needed and justified.

One of the most notable victims of this pressure was Basis, a stablecoin-focused project that raised over $130 million from a multitude of venture capital firms. In their recent notice, the team describes how existing U.S. securities regulation made it difficult (and eventually impossible) to build Basis in the way in which they had imagined. As such, Basis is shutting down and returning most of the money they raised.

All in all, cryptoassets are maturing. Whether you despise them, actively invest in them, or even work in a job position related to them, cryptoassets have come a long way from the Mt. Gox days. Day by day, development milestones are being reached, the fraudsters are being pushed out, new network metrics and fundamental valuation models are being researched, and most importantly, we get that much closer to a future where everyone can be truly financially independent.

To new users, users who have been with Coinigy since the beginning, and everyone in between, we thank you all for the support. Without it, we would not have been able to keep the service going and continue to build it out for all these years. Onwards and upwards. 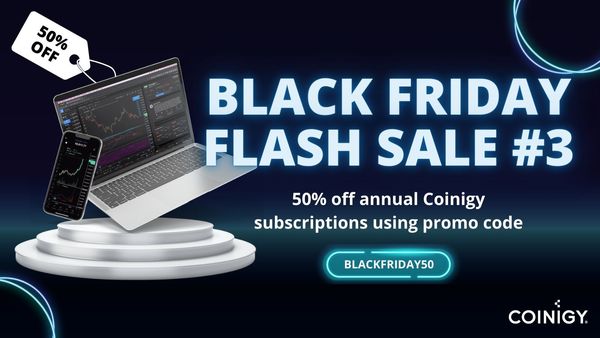 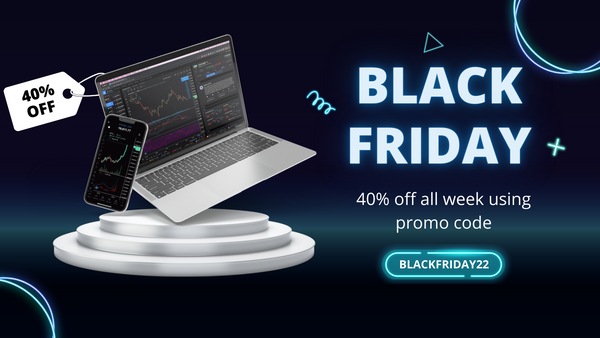