Presenting the Insights team's Weekly Roundup #7! Apart from the original research pieces the Insights team works on, the Roundup series aims to highlight key pieces of work from the community as a whole. Along with this, we briefly describe key industry news developments that took place during the past week that community members may have missed. If you have any questions or think we missed something important, feel free to let us know!

The Four Horsemen of Centralization by Ali Yahya

How Bitcoin Functions as Property Law by Eric D. Chason

A Guide to Major Cryptocurrency Indexes by Faisal Khan

On bonding curves and charitable giving by David Truong

Industry News Bits
The Block returns once again with solid investigative journalism with an exposé on Blockchain Terminal, a project that held a $30+ million initial coin offering. The BCT terminal aimed to be a crypto-focused competitor to the Bloomberg Terminal, but the project was plagued by identify fraud, money mismanagement, and other issues.

The U.S. Commodity Futures Trading Commission published a request for comment regarding Ethereum.

Popular cryptoasset exchange Kraken is preparing a private offering that values the platform at $4 billion.

In a speech, U.S. Treasury Secretary for Terrorism and Financial Intellignece called for industry players to collectively assist in the prevention of cryptoassets being used for illicit activities.

One of the largest hospital networks in the U.S., Massachusetts General Hospital, is exploring blockchain as a way to store and transfer data about patients.

Blockchain giant Consensys confirmed the layoff of 13% of its workforce as it shifts focus.

Seven member countries of the European Union have signed a document that intends to promote distributed ledger technology.

Cryptoasset exchange Binance released a video that provides a sneak peek of their upcoming DEX.

Over one third of big business in Germany believe that blockchain will be as impactful as the internet.

The Venezuelan government stated that it plans to start selling oil in exchange for the Petro cryptocurrency starting in 2019.

Shinhan Bank, South Korea's second largest bank, has begun an initiative to use blockchain technology for internal record-keeping as a means to minimize human error.

Gazprombank, a state-owned bank and one of Russia's largest, is developing an institutional cryptoasset custody offering.

Insurance giant State Farm is exploring whether blockchain technology is a "viable product for insurance adoption." 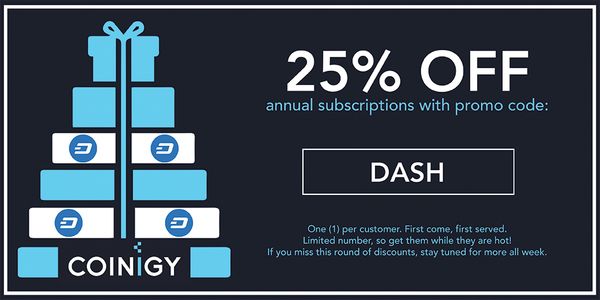 DASH-ing through the snow, in a one-horse open sleigh… Use Promo Code DASH at check out for 25% off your annual subscription. One (1) per customer. First come, first served. 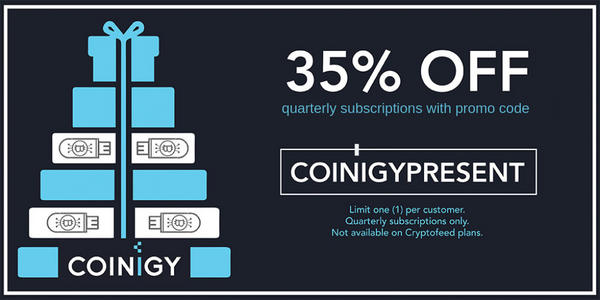 Today is the beginning of Coinigy's 12 days of Christmas! Going from now until just a couple hours before Christmas begins, at checkout, use promo code COINIGYPRESENT for 35% off