Where do Tokens Fit in Capital Structure?

We fundamentally believe that crypto-based fundraising will become one of the primary mediums upon which companies raise money in the future. Year to date, companies have already raised $13.53 billion via ICOs, compared to the ~$17 billion raised via traditional venture capital as of the end of Q1. Second quarter ICO numbers are expected to outpace VC numbers as well.

In another context, try to imagine when Starbucks was originally founded in Seattle, they had raised money by selling $10 million in Starbucks gift cards. Just like today's ICOs, these cards could be traded on the public market and their value would derive directly from the demand for coffee and the probability that Starbucks would be successful and deliver on its promises.

Let's say Starbucks had also raised equity, which is actually becoming popular in today's crypto world through new VC shops like Placeholder. There is another debate to be had regarding equity versus token capital accretion in the long run. (More writing on this to come later.)

Now, let's imagine coffee fell out of favor so much that Starbucks had to declare bankruptcy and begain to liquidate its assets.

The question is: when do the Starbucks gift card / token holders get paid?

Let's look at the "old-school" capital structures and how the different stakeholders stack up. There are generally four "capital buckets" that most financing and securities fall into. See the below hierarchy: 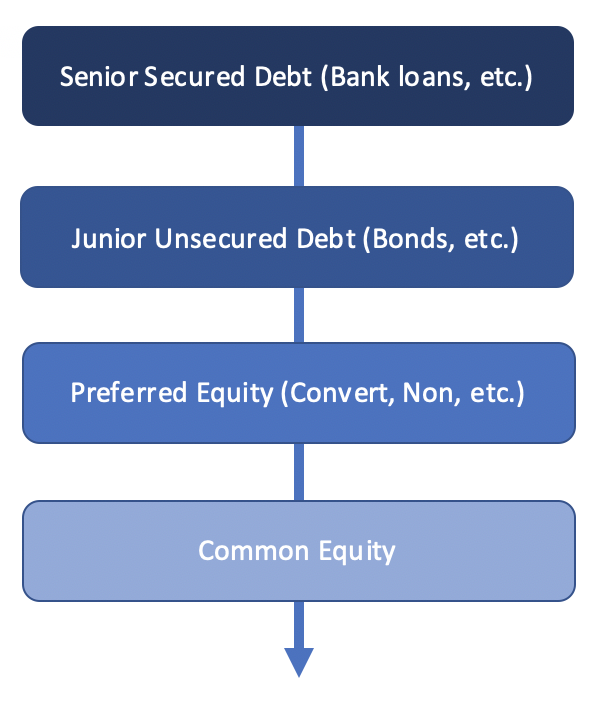 The dynamics of this waterfall are aligned with the risk vs. reward relationship of each level, as one might expect.

I have written previously on how Central Payment Tokens (CPTs) look a lot like traditional consumer-facing gift cards, with the only difference being that CPTs can be traded on a public market. With that in mind, where do gift cards fit into traditional capital structures?

First, Accounts Payable, the parties you owe money to, is considered unsecured debt and must sit in line with all of the bond holders and other unsecured creditors. Gift cards are a bit different in that you don't owe them money / capital, but rather you owe them a product / service which could seen as collateral.

It may be helpful to look at some of the more recent bankruptcy cases and how gift card holders were treated.

One of the more well-known consumer-facing bankruptcy cases was RadioShack in 2015. After the electronic parts store started to shut its doors, the company said it would actually redeem outstanding gift card credit for cash. This was most likely due to the fact that Standard General bought many of the remaining stores and provided the company with some extra cash to protect itself from a consumer protection lawsuit.

A more recent example is the current bankruptcy process of Bon-Ton (owner of Boston Store and other retailers) and what is going to happen to their gift cards. A representative from the Consumers Union adds:

The courts often allow retailers to continue to accept gift cards after a bankruptcy filing — and plenty of retailers have filed lately — but they’re not required to do so.

Differing from the RadioShack process, Bon-Ton is not redeeming any oustanding credit for cash and will only allow ten days post filing for redemption of gift cards for products:

Gift cards and gift certificates will continue to be honored for a period of 10 days following the first day of store closing sales, inclusive of the sale commencement date. Following this 10-day period, only cash and nationally recognized bank credit cards will be accepted during store closing sales.

What Does This Mean For Crypto Token Holders?

To start, none of the above is meant to perfectly align utility tokens (whether they are centralized or decentralized) with traditional gift cards. As with most things in crypto, finding traditional financial instruments / products that are perfect precedents is never easy, if possible at all.

First off, any tokens that are easily classified as securities are not the focus of this discussion. These assets include tokens that guarantee a percentage of the issuing company's profits / dividends, provide a direct ownership stake in an entity, or are significantly controlled by a third party.

The assets in question are those, usually issued via an ICO, that are used as utility / payment tokens within an ecosystem. These could be CPT like assets that, theoretically, align pretty well with traditional gift cards in that the ICO participants will eventually use them to buy the product provided by the issuing company at a discounted rate. The alternative, and more interesting, assets are those that are used within a distributed, P2P network between users and never end up back in the issuing company's wallet. Arguably, these evolve to be non-securities as the developing company sells all assets into the market, open sources the code, or completely dissolves itself and the network continues to build upon itself due to built in incentive structures, governance, etc.

These distributed network token holders may very well be investing in an entirely new asset class that must find a new home within the capital structure hierarchy. Interestingly, these new assets have a little bit of everything when it comes to different capital class characteristics. Most chains provide on-chain direct token governance -- just like how common stockholders can vote on board-level decisions. This allows for oversight by the token holders along with representation of investment. They are also publicly traded on open markets with price discovery and liquidity, and are available to anyone interested in using the tokens to purchase product or to speculate and provide efficiency to the market. These token holders align somewhat closely with gift card / unsecured creditors, in that they do expect something outside of pure financial gain. as a traditional equity holder might.

There is also the fact that a failing distributed network most likely won't go through the normal bankruptcy filing process. There may not be any treasury holding funds to payback token holders. There may not even be an entity able to file for bankruptcy as more and more industries move into decentralized autonomous organization (DAO) structures.

Looking ahead, it will be interesting to see how organizations and networks protect token holders. Will they follow the foot steps of traditional public companies and state that token holder interests always come first? Will networks have built in liquidity pools for token holders in case the network fails and everyone is left with no product to utilize their token?