A recent uptick in literature surrounding the merging, acquisition, or takeover of crypto networks has sparked my interest. I had a brief stint working in corporate development / internal M&A so this subject is interesting to ponder when it comes to new network ownership models, tokenized economies, forking, and defensive tactics for projects.

A brief summary of traditional acquiring may be helpful for some. In this reading we will focus on stock-based acquisitions and not asset sales as stock acquisitions are the most aligned with crypto network takeovers. It will also help to talk specifically about public companies buying other public companies as their shares are traded in the public market, just like crypto networks. When Buyer Inc. wants to purchase Seller Inc. they approach the management & board of the company and come to an agreement, with the approval of shareholders, as to what the purchase price will be. Most of the time, save for some very rare occasions like a hostile takeover threat & other synergistic / long term growth ideas, the agreed price will need to be above the current price of the stock. This is pretty self-explanatory since shareholders usually don't enjoy selling their stock at a lower price than they need to.

Alternatively, Buyer Inc. can go ahead and initiate a hostile takeover attempt. If Seller Inc. rejects the original tender, Buyer Inc. can go directly to the public shareholders and begin a campaign to gain backers for a proxy fight in order to start replacing the board. Additionally, Buyer Inc. could go out and start purchasing a large chunk of outstanding stock in order to use it as a negotiating tactic. I encourage everyone to read about some of the more well-known hostile takeovers throughout history.

Looking at the above, crypto networks obviously operate a little differently. Crypto governance is still finding its place within the ecosystem and each blockchain operates a bit differently when it comes to voting, rule implementation, etc. With that in mind, there are a few different attack vectors for a takeover of a crypto-network, that is the ability to change development of the underlying protocol / project or 51% attack the mining network.

Let's first start with the 51% attack of the mining network of Bitcoin since it is a widely discussed topic and has a bit more research behind it. There are a few sources out there that estimate the upfront costs for a 51% attack range from ~$1.5 billion all the way up to ~$7 billion . Costs here vary widely and there is no verifiable number due to the unknown hardware pricing, availability, and cost of real estate to house the hardware. The more interesting factor is the ongoing cost of a 51% attack.

Joseph Bonneau's paper (referenced above) does a fantastic job outlining the four different methods for taking over a mining network as seen below:

First off, Bonneau's paper was written when Bitcoin's hashrate was hovering around 10,000,000 TH/s which was the last 3 months of 2017. Bitcoin's current (July 12th, 2018) hashrate stands at roughly 3.5x that figure. With that in mind, assuming hardware prices have remained mostly level - which I think is a fair assumption as most GPU, memory, and ASIC prices have come back down to earth after their metoric rise at the start of the year - we can use the hashrate increase as a proxy for the required hardware cost. Additionally, ongoing energy costs have not drastically changed as far as I can see.

Assuming the above is fair, let's update Bonneau's numbers to today:

Before diving into this buyout strategy, my colleague, Matt Thompson, pointed out that Bitmain / Jihan Wu controls close to, if not more than, 51% of the mining power out there through both their affiliated mining pools or indirectly through Bitmain's hardware. Matt also noted that Jihan was integral within the BCH fork so there are some obvious incentives for him wanting to hurt Bitcoin in anyway possible in order to cause some / all of the market to shift over to his Bitcoin Cash fork.

For the time being, let's assume a different party wanted to execute a buyout attack on Bitcoin. As Bonneau notes above, miners will only continue to operate, or start a new operation, if the present value of the future expected mining rewards outweighs the current or upfront costs. The same is true within a buyout of any of these firms. Bonneau also adds:

If an attacker can credibly commit to buying out half of all
capacity and using it to destroy the system, current owners will have a strong incentive to sell to avoid being left in the 49% which does not sell and ends up holding worthless capacity

This is an especially interesting point, that will also be touched on in the next section surrounding direct token buyouts, in that there is a "critical mass" a buyer can reach in order to scare the remaining sellers to sell at a discount in order to avoid being left in the 49% camp. On the other hand, if the mining market was able to learn about this roll-up before it reached a meaningful market share, the remaining miners could pledge to not sell in order to defend the market against the 51% attack. This gets into a bit of game theory since one sizeable seller could sell out for a premium to defend themselves and destroy the entire strategy. PoS systems are especially susceptible to this type of attack since the staking assets will become worthless post-attack where as PoW hardware still, arguably, has value post-attack.

The second attack vector for parties wanting to take over a crypto network would be direct token acquisition. Depending on governance models (which I encourage everyone to learn a bit about here, here, here, and here) token holders, or users, have a say on development and code adoption throughout the network. Most notably, Decred's hybrid governance system is a hot topic today through which users have pseudo-veto power over the mining network.

The initial response I got from many people when I brought up this idea was, "any takeover victim can just fork the asset." For many cases, this may very well turn out to be true. A real world example could be the ETC fork post DAO where the ETC community didn't believe in the rollback of the chain that Vitalik and team enacted. More abstractly, if Buyer Inc. wanted to take over Seller Inc. and their chain / cryptoasset and the community didn't believe in the mission or strategy of Buyer Inc., they could fork the asset away from the acquired chain.

Unlike in traditional equity markets, where, most of the time, shareholders are happy to sell their shares at an acquisition premium somewhere above the current market rate. There might be some push back if the shareholders believe that their stock will be worth more within their investment horizon time period and will vote to reject the acquisition. It is also important to note that most public companies only float about 9.5% of their total equity. The rest is held by the company within stock option plans, restricted stock, or treasury.

Utility token holders, on the other hand, may reject an acquisition offer because the purchaser may wipe out the product through which their token derives utility value. In the current state, unfortunately, many token purchasers (especially those that participate in ICOs) are buying these tokens from a speculative investment perspective rather than a usage one.

M&A would differ greatly depending on whether the buyer was a financial buyer (PE, activist investor, family office, etc.) or strategic (competitor, up / down stream company, etc.). Financial buyers would need to convince current token holders that a fork would not be beneficial and could utilize airdrops or market selling action on the forked asset to combat this action. On the other hand, strategic buyers would need to tell a compelling enough story about the combined chains, projects, assets, and product in order to convince Seller Inc. token holders to sell their asset or fork into Buyer Inc's asset.

Hostility from both buyer types could come from the selling of the forked asset and then using those proceeds to partially fund the buying of the takeover token.

M&A within the industry has already taken place on the centralized / corporate level with Coinbase's purchase of Paradex and a number of broker dealer firms along with Circle's acquisition of Poloniex. To my knowledge, a protocol level takeover is yet to be seen.

I am looking forward to writing more on "poison pills" takeover targets could implement along with other defense mechanisms. It will also be interesting to watch how the market prices, trades, and reacts to these token-based acquisitions when they do come. 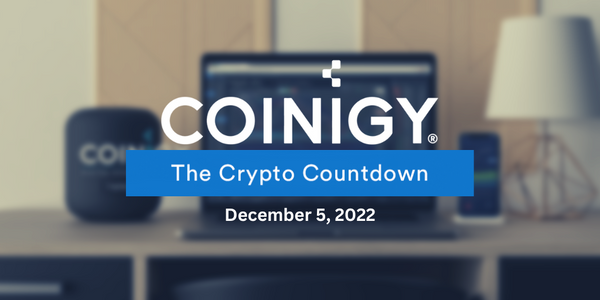 Hello, and a happy new month! We’re about to close 2022, and the crypto market is looking to recover from the FTX implosion. But enough of the gloomy sentiments. Last week saw some bullish news in the space, leaving us hopeful for the new month. The biggest news was